There I am back after 2 weeks with "on the needles". Usually you should mean, that I was made so much stuff during the past 2 weeks. But saddly not. I was working only on one project my "Raindayscarf" or how it is called in German "Regentagstuch". 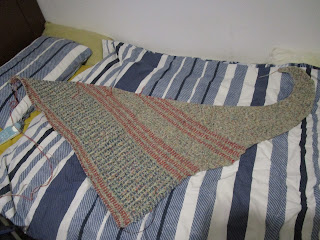 Two weeks ago, I just finished part two. Also, the red part and started with the blue part. Now, I am in the middle of part four, which is also the last part of the scarf. And, even if I do not like the red part really, I totaly like the scarf by now.

I also have another wool for that project. Common colors but without sprinkles. I will see, if I will o it right again, or doing something other in between. Because there are a lot of birthays this year too. ;)